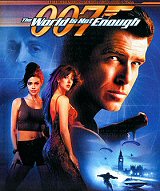 THE VILLAIN:    Victor Zokas AKA Renard (Robert Carlyle) - global anarchist, terrorist who kidnapped and fell in love with Elektra King, shot in the head by 009; the bullet, lodged in Renard's brain, is slowly killing him, having shut down the pain receptors, allowing him to push himself harder than any other human.

Bull/Bullion (Goldie) - enforcer for Zukovsky, but secretly working for Renard.

VILLAIN'S PLOT:    Elektra intends to destroy Istanbul by exploding a nuclear submarine in the Bosphorus, thus forcing the world to rely on Elektra's pipeline.

Valentin Zukovsky (Robbie Coltrane) - Russian crime boss who now owns a casino and caviar factory in Baku, occasionally provides equipment for Elektra, now his nephew is providing her with a nuclear submarine.

R (John Cleese) - the 'young fellow' Q is grooming for his replacement.