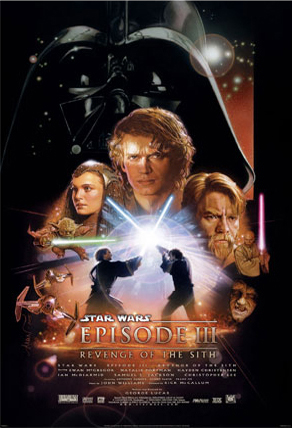 War! The Republic is crumbling under attacks by the ruthless Sith Lord, Count Dooku. There are heroes on both sides. Evil is everywhere.

In a stunning move, the fiendish droid leader, General Grievous, has swept into the Republic capital and kidnapped Chancellor Palpatine, leader of the Galactic Senate.

As the Separatist Droid Army attempts to flee the besieged capital with their valuable hostage, two Jedi Knights lead a desperate mission to rescue the captive Chancellor...

Star Wars Episode III: Revenge of the Sith is a 2005 American epic space opera film written and directed by George Lucas. It is the sixth and final film released in the Star Wars saga and the third in terms of the series' internal chronology.

The film takes place three years after the onset of the Clone Wars. The Jedi Knights are spread out across the galaxy leading a massive clone army in the war against the Separatists. The Jedi Council dispatches Jedi Master Obi-Wan Kenobi to eliminate the evil General Grievous, leader of the Separatist Army. Meanwhile, Jedi Knight Anakin Skywalker, separated from Kenobi, his former master, grows close to Palpatine, the Chancellor of the Galactic Republic and, unbeknownst to the public, a Sith Lord. Their deepening friendship proves dangerous for the Jedi Order, The Republic, and Anakin himself who inevitably succumbs to the Dark Side of the Force and becomes Darth Vader, changing the fate of the galaxy forever.

As the Clone Wars rage on, the Galactic Republic has suffered major setbacks against the Separatists. Jedi Knights Anakin Skywalker and Obi-Wan Kenobi infiltrate the flagship of Separatist commander General Grievous to rescue the abducted Chancellor Palpatine. However, they are confronted by Count Dooku, who engages the Jedi in a lightsaber duel. After Dooku knocks Obi-Wan unconscious, Anakin fights and kills Dooku at Palpatine's urging. After a skirmish with Grievous, who then flees, the Jedi crash-land the ship on Coruscant. There, Anakin reunites with his wife, Padmé Amidala, who reveals she is pregnant. Anakin is happy at first, but he then begins to have disturbing premonitions of Padmé dying in childbirth.

Palpatine places Anakin on the Jedi Council as his representative, but Anakin is denied the rank of Jedi Master and ordered to secretly monitor the Chancellor. Frustrated at being excluded from the Council, Anakin begins to lose faith in the Jedi and becomes more attached to Palpatine, who tells him that the dark side of the Force holds the power to prevent death. On the planet Utapau, Obi-Wan engages and kills Grievous. When Palpatine reveals himself as the Sith lord Darth Sidious, Anakin reports his treachery to Jedi Master Mace Windu. In the ensuing lightsaber duel, Windu subdues Palpatine by deflecting his opponent's Force Lightning back at him. Just then, Anakin rushes in and intervenes on Palpatine's behalf, severing Windu's hand; Palpatine then kills Windu. Desperate to save Padmé, Anakin becomes Palpatine's apprentice and is rechristened Darth Vader.

Palpatine issues Order 66 across the galaxy to have the Clone Troopers turn on their Jedi Masters, and sends Vader with a legion of clone troopers to the Jedi Temple to kill everyone there. Vader then travels to the volcanic planet Mustafar to kill the Separatist leaders hiding there. Palpatine addresses the Senate and reforms the Republic into the Galactic Empire, declaring himself Emperor.

Obi-Wan and Jedi Master Yoda discover Anakin's treachery, and split up to confront Vader and Sidious. Unable to convince Padmé of Anakin's turn to the dark side, Obi-Wan stows away on her ship when she travels to Mustafar. When Padmé discovers what Vader has done, she tries to take him back, but Vader accuses her of betraying him and uses the Force to choke her into unconsciousness. Vader engages Obi-Wan in a fierce duel, but Obi-Wan severs Vader's legs and left arm and Vader is immolated. Obi-Wan takes his former apprentice's lightsaber and goes to help Padmé. Meanwhile, Yoda confronts the Emperor, but is forced to escape when their duel reaches a stalemate.

In a medical facility on Polis Massa, Padmé dies after giving birth to twins Luke and Leia. Meanwhile, Palpatine finds Vader on Mustafar and brings him back to Coruscant, rebuilding his apprentice's ruined body with cybernetic limbs and a respirator. Tormented by the discovery of Padmé's death at his own hands, Vader screams, the last vestige of humanity now driven from him. Vader begins overseeing the construction of the Death Star at Palpatine's side. A funeral is held for Padmé, her body dressed to continue the illusion of pregnancy. Knowing that the twins must remain hidden from the Empire, Senator Bail Organa adopts Leia and takes her to Alderaan, while Luke is to be taken to his stepfamily on Tatooine. Organa allows the droids C-3PO and R2-D2 to remain aboard the Tantive IV and has C-3PO's memory erased. Yoda teaches Obi-Wan how to commune with the spirit of Qui-Gon Jinn before going into exile on Dagobah. Obi-Wan takes the infant Luke to Tatooine, where he intends to watch over him until the time is right to challenge the Empire.

Ewan McGregor as Obi-Wan Kenobi: Obi-Wan is a General for the Galactic Republic and is a Jedi Master who sits on the Jedi Council. He often travels and performs missions with his best friend and former Padawan, Anakin.

Hayden Christensen as Anakin Skywalker / Darth Vader: Anakin is a recently knighted Jedi and hero of the Clone Wars. Upon learning of his wife's pregnancy, he begins to have recurring visions of her dying in childbirth. Because similar visions accurately foretold his mother's death, he swears that he will do whatever it takes to save her, and in his determination, he falls to the dark side of the Force and becomes the Sith lord Darth Vader. While many assume that James Earl Jones is the uncredited, briefly heard voice of Darth Vader at the film's conclusion, Jones, when specifically asked if he had supplied the voice, either newly or from a previous recording, told Newsday, "You'd have to ask Lucas about that. I don't know". However, the commentary on the DVD release states that, while the voice will always be uncredited, any true Star Wars fan "should know the answer".

Natalie Portman as Padmé Amidala: Padmé is Anakin's secret wife, who has recently become pregnant with twins. As Senator of Naboo, she is deeply concerned about Palpatine's growing power, and her husband's increasingly disturbing behavior.

Ian McDiarmid as Chancellor Palpatine / Darth Sidious: As the Supreme Chancellor of the Galactic Republic, Palpatine enacted the start of the Clone Wars against the Separatists. As a result, the Senate has voted him vast emergency powers, effectively turning him into a dictator. By this time, he becomes a sort of mentor to Anakin, manipulating him into distrusting the Jedi. In reality, Palpatine is the Sith Lord Darth Sidious, who finally steps from the shadows to destroy the Jedi Order and the Republic it serves, and lure Anakin to his side.

Frank Oz voices Yoda: The Jedi Council's wise old leader. He is a friend and mentor to many Jedi. He plays a major role in the Battle of Kashyyyk.

Samuel L. Jackson as Mace Windu: Windu is a Jedi Master who sits on the Jedi Council and is also a Jedi General in the Clone Wars.

Matthew Wood voices General Grievous: Grievous is a fearsome cyborg and General of the Separatists' droid army. He is responsible for kidnapping Palpatine at the beginning. He is also skilled in lightsaber combat, having been trained by Count Dooku, wielding two green and two blue lightsabers taken from Jedi he has killed.

Jimmy Smits as Senator Bail Organa: Bail Organa is a Senator in the Galactic Republic and friend to the Jedi, who grows concerned at Palpatine's growing power.

Silas Carson as Nute Gunray and Ki-Adi-Mundi: Gunray is the Viceroy of the Trade Federation, who distrusts Grievous and dares to question his leadership. Ki-Adi-Mundi is a Jedi Master who sits at the Jedi Council and General in the Clone Wars.

Temuera Morrison as Commander Cody and Clone Troopers: Cody and the clone troopers are part of the army for the Republic. As seen in Attack of the Clones, they are the clones of the bounty hunter Jango Fett.

Christopher Lee as Count Dooku / Darth Tyranus: He is a Sith apprentice to Darth Sidious, Leader of the Separatists, and Grievous' superior.

Peter Mayhew as Chewbacca: Chewbacca is a Wookiee who is friendly with Yoda, and fights alongside him in the Battle of Kashyyyk.

It was announced in 2004 that Gary Oldman had been approached to provide the voice of General Grievous; however, complications arose during contract negotiations after Oldman learned the film was to be made outside of the Screen Actors Guild, of which he is a member. He backed out of the role rather than violate the union's rules. Matthew Wood, who ultimately voiced Grievous, disputed this story at Celebration III, held in Indianapolis. According to him, Oldman is a friend of Rick McCallum, producer of the Star Wars prequel trilogy, and recorded an audition as a favor to him, but was not chosen. Wood, who was also the supervising sound editor, was in charge of the auditions and submitted his audition anonymously in the midst of 30 others, under the initials "A.S." for Alan Smithee. Days later he received a phone call asking for the full name to the initials "A.S." An internet hoax said John Rhys-Davies was considered for the role.