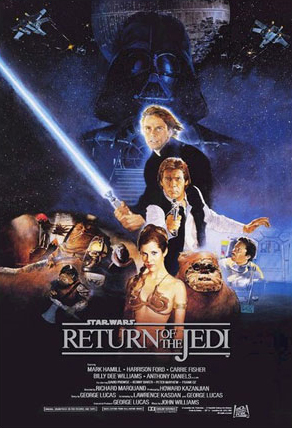 Luke Skywalker has returned to his home planet of Tatooine in an attempt to rescue his friend Han Solo from the clutches of the vile gangster Jabba the Hutt.

Little does Luke know that the GALACTIC EMPIRE has secretly begun construction on a new armored space station even more powerful than the first dreaded Death Star.

When completed, this ultimate weapon will spell certain doom for the small band of rebels struggling to restore freedom to the galaxy...

George Lucas and Lawrence Kasdan, with Lucas as executive producer. It is

first film to use THX technology. The film is set approximately one year after

The Empire Strikes Back.[1] The evil Galactic Empire, under the direction of the

ruthless Darth Vader, is building a second Death Star in order to crush the

stages of its construction, the Rebel Fleet launches a full-scale attack on the

Death Star in order to prevent its completion and kill Palpatine, effectively

bringing an end to the Empire. Meanwhile, Luke Skywalker, a Rebel leader and

Jedi Knight, struggles to bring Vader, who is his father and himself a fallen

Jedi, back from the Dark Side of the Force.

Marquand signed on as director. The production team relied on Lucas' storyboards

during pre-production. While writing the shooting script, Lucas, Kasdan,

ideas to construct it. Kazanjian's schedule pushed shooting to a few weeks early

post-production. Filming took place in England, California and Arizona from

The film was released in theaters on May 25, 1983, receiving mostly positive

reviews. Observers have considered the film to be a slightly lesser achievement

than the previous films. The film grossed over $475 million worldwide. Several

next 20 years. Star Wars continued with Episode I: The Phantom Menace as part of

the film series' prequel trilogy. A 3-D version of the film is scheduled to be

released in 2017 to coincide with the 40th anniversary of the Star Wars saga.

Hutt with the help of Princess Leia, Lando Calrissian, Chewbacca, C-3PO and

and releases Han from a block of carbonite, but she is captured and enslaved.

Luke arrives soon afterward and allows himself to be captured. After Luke

survives a battle with the Rancor, Jabba sentences Luke and Han to be executed

by the Sarlacc. Luke breaks free and a large battle erupts, during which Leia

strangles Jabba to death, Han knocks Boba Fett into the gaping maw of the

Sarlacc and Luke destroys Jabba's sail barge. While Han and Leia meet with the

other Rebels, Luke returns to Dagobah, only to find that Yoda is dying. With his

"another Skywalker". The spirit of Obi-Wan Kenobi reveals that the "other

Skywalker" Yoda spoke of is Luke's twin sister, who Luke discovers is Leia.

Obi-Wan then tells Luke that he must confront Vader again to defeat the Empire.

Star, and hatch a plan to destroy it. Han leads a strike team to destroy the

battle station's shield generator on the forest moon of Endor, allowing a

squadron of starfighters to enter the incomplete superstructure and destroy the

station from within. The strike team, with Luke in tow, travels to Endor in an

Imperial shuttle; Vader senses Luke's presence on the shuttle, but lets them

On Endor, Luke and his companions encounter a tribe of Ewoks and form a

partnership with them. Later, Luke confesses to Leia that she is his sister,

that Vader is their father and that he is leaving to confront him. Luke

surrenders to Imperial troops, so that they will bring him to Vader. He

unsuccessfully tries to convince Vader to turn from the dark side of the Force,

but Vader takes Luke to the Death Star to meet Emperor Palpatine, his Sith

master and leader of the Empire.

Rebellion. On Endor, the Rebels are captured by Imperial forces, but a surprise

counterattack by the Ewoks allows the Rebels to launch an attack. Meanwhile,

Lando leads the Rebel fleet in the Millennium Falcon to the Death Star, only to

find the station's shield is still up and the Imperial fleet waiting for them.

Palpatine tempts Luke to give in to his anger and join the dark side, and Luke

and Vader engage in a lightsaber duel. Vader discovers that Luke has a sister,

and threatens to turn her to the dark side. Luke snaps and attacks Vader,

his place; Luke steps back from the brink and refuses, declaring himself a Jedi.

Palpatine attacks him with Force lightning. Unable to watch his son suffer,

Vader turns on Palpatine and throws him down a reactor shaft to his death, but

is mortally wounded by his master's lightning. With his dying breaths, the

was good in him after all.

On Endor, the strike team, with the help of the Ewoks, defeats the Imperial

forces and destroys the shield generator, allowing the Rebel fleet to launch a

final assault on the Death Star. Lando leads the remaining ships into the

Imperial shuttle with his father's body before the Death Star explodes, while

Lando escapes in the Falcon. On Endor, Han tells Leia that he knows she loves

Luke and offers to step aside; she tells him that Luke is her brother and kisses

him. That evening, Luke returns to Endor and cremates his father's body and

armor on a funeral pyre. As the Rebels celebrate the end of the Empire, Luke

sees the spirits of Obi-Wan, Yoda and Anakin Skywalker watching over them.

Mark Hamill as Luke Skywalker: In the year since his encounter with Darth

and taken to Jabba the Hutt, Han is freed by Princess Leia, only to be

sentenced to death by Jabba the Hutt. He escapes with the group after Luke

Carrie Fisher as Princess Leia Organa: A princess from Alderaan, Leia has

been aiding Luke in his search for Han. It is later revealed that she is

Billy Dee Williams as Lando Calrissian: After Cloud City was taken over by

the Empire, Lando joined the Rebel Alliance, and aided Luke in his search for

Han Solo. He would later use the Millennium Falcon, Han Solo's ship, to lead

an attack on the Death Star.

relations, 3PO is instrumental in establishing friendly relations between the

Rebels and the Ewoks on Endor, who mistakenly believe him to be a god.

introduced in Revenge of the Sith.

before being seduced by the dark side of the Force and becoming Darth Vader.

is the supreme ruler of the Galactic Empire and a Dark Lord of the Sith. He

Skywalker to the dark side of the Force.

to become one with the Force.

David Prowse as Darth Vader: Vader has been relentlessly continuing his

search for Luke, but he is set off course when the Emperor sends him to Endor

Alec Guinness as Obi-Wan "Ben" Kenobi: Struck down by Vader in A New Hope,

Obi-Wan continues to offer guidance to Luke as a Jedi spirit.

Denis Lawson as Wedge Antilles: Wedge is now the leader of Rogue Squadron,

Kenneth Colley as Admiral Piett: Piett, one of the few officers under Vader's

command to survive his wrath, commands the Imperial Fleet at Endor from the

Warwick Davis as Wicket: An Ewok who leads Leia and eventually her friends to

Jeremy Bulloch as Boba Fett: A bounty hunter who, after capturing and

delivering Han Solo to Jabba the Hutt, stays on at the crime lord's palace and

engages in the battle above the Sarlacc.

Caroline Blakiston as Mon Mothma: Mon Mothma is a co-founder of the Rebel

Alliance and also serves as its leader. She explains the mission of destroying

the Death Star to the Alliance.

Kenny Baker was originally cast as the Ewok Wicket, but was replaced by

of the shoot. Davis had no previous acting experience and was cast only after