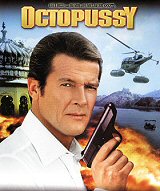 SUB-VILLAINS:    Colonel Luis Toro (Ken Norris) - Bond impersonates this officer on assignment to destroy a spy plan in the Caribbean.

VILLAIN'S PLOT:    Kamal Khan joins with reogue Soviet General Orlov to utilise Octopussy's Circus in order to smuggle and detonate a nuclear bomb on an American military base in Germany, which will lead to Western forces being withdrawn and pave the way for a Soviet invasion.

Magda (Kristina Wayborn) - associate of Octopussy in both her smuggling and circus ventures.

THE BOND TEAM:    M (Robert Brown) - head of the British Secret Service, an authoritative father figure who sends Bond on his missions.