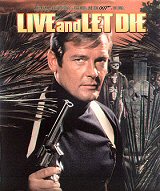 THE VILLAIN:    Dr Kananga/Mr Big (Yaphet Kotto) - Caribbean island dictator, who also acts as an underworld boss and heroin distributor in the US.

SUB-VILLAINS:    Baron Samedi (Geoffrey Holder) - ruler of the Kingdom of the Dead in the voodoo religion, the man who cannot die; a mythical spirit working with Kananga or a mere mortal?

Tee Hee (Julius Harris) - grinning killer who lost an arm to a crocodile and now sports a lethal prosthetic pincer in it's place.

VILLAIN'S PLOT:    Mr Big uses Fillet of Soul restaurants and voodoo shops as fronts for distributing two tons of free heroin, thus doubling the number of addicts in the US while forcing all the competitors out of business.

Rosie Carver (Gloria Hendry) - a CIA agent under the control of Kananga.

Solitaire (Jane Seymour) - Kananga's virgin voodoo priestess who has the power to see the future...so long as she remains chaste.

THE BOND TEAM:    M (Bernard Lee) - head of the British Secret Service, an authoritative father figure who sends Bond on his missions.