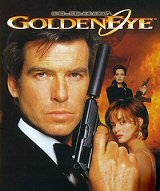 VILLAIN'S PLOT:    Alec Trevelyan intends to gain vengeance for the British betrayal of the Lienz Cossacks 50 years previous by robbing British banks through hacking into their systems moments before using a GoldenEye satellite to fire an electromagnetic pulse over London that will wipe out the banks' records.

BOND WOMEN:    Caroline (Serena Gordon) - psychiatrist sent to the south of France to evaluate 007 for MI6.

Natalya Fyodorovna Simonova (Izabella Scorupco) - Russian level two systems programmer working at the Severnaya facility, the only survivor of a murderous attach carried out by General Ouromov and Xenia Onatopp.

Defence Minister Dimitri Mishkin (Tcheky Karyo) - Russian who comes to realise his betrayal by General Ouromov moments before being killed.