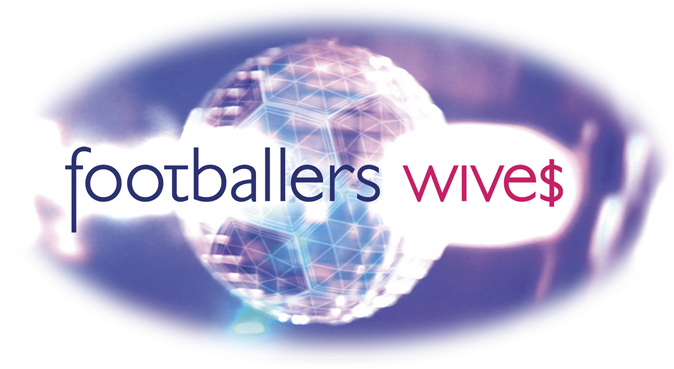 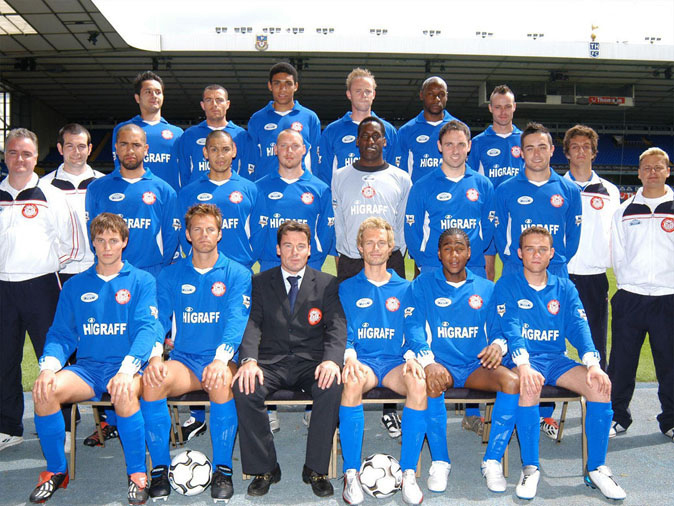 Footballers' Wives (stylised as Footballers Wive$) is a British television drama surrounding the fictional Premier League Association football club Earls Park F.C., its players, and their wives. It was broadcast on the ITV network from 8 January 2002 to 14 April 2006. The show began with a multi-lateral focus on a variety of different types of relationships explored; however, from the third series onward, the primary focus was on a complex love triangle between Tanya Turner (Zöe Lucker), Amber Gates (Laila Rouass) and Conrad Gates (Ben Price).

The show centres around the fictional 'Earls Park Football Club' (nicknamed 'Sparks'). The series was produced by Liz Lake, Claire Phillips and Cameron Roach. Its executive producer was Brian Park. The show began as an ensemble of three different 'types' of football couple. However, from the third series on, the show more or less revolved around the character Tanya Turner (Zöe Lucker). Lucker left the series halfway through series four, though she returned midway through the next series. However, by this time the series ratings had fallen significantly, therefore certifying Lucker as the main star of the show even though the series was cancelled in 2006.

In the earlier series, Earls Park Football Club's home games were played at the real life Selhurst Park, which is the home of Crystal Palace Football Club. From series three onward, stadium shots were filmed at White Hart Lane.

Series one was shown between 8 January and 26 February 2002 with eight episodes. The series follows a group of footballers' wives whose husbands play for Earls Park (nicknamed "Sparks"). Ian Warmsley, Sparks' latest signing, deals with his up-and-coming success. His wife Donna is more concerned with getting their son back from the woman who adopted him after her parents forced her to give him up when she was a teenager. Trouble crops up when their 8-year-old daughter is kidnapped in the final episode of the series. Donna's younger sister Marie is staying with them, causing trouble. She has a secret fling with the Sparks' mid-fielder and ruthless bad boy Jason Turner, who is married to the beautiful, yet vile, Tanya Turner, TV's megabitch. Tanya is too busy to worry about the affair as she tries to save her husband's job when club owner Frank Laslett buys 'Italian stallion' Sal Biagi, who takes Jason's job. Tanya and Jason take matters into their own hands on the way home from a club dinner, and in a drunken brawl, Tanya puts Frank into a coma. With the help of Jason, they push his car off the side of the road, making it look like a drunken accident.

Series two was shown between 8 January and 26 February 2003 with eight episodes. Series 2 begins with Tanya and Jason in court, lying on oath. The British population is convinced that Frank is deranged and that he tried to rape Tanya. Charges are dropped, and Tanya walks away scot-free. Chardonnay Lane-Pascoe and Kyle Pascoe raise Jackie Pascoe's baby son, Paddy, as their own. At the end of the series, Jason sits on the rooftop, drunk and feeling sorry for himself, but as he slips and desperately grasps for a life-saving hold on the ledge, an unseen (by the audience) assailant hits his hands with a champagne bottle, causing Jason to fall to his death.

Series three was shown between 11 February 7 April 2004, with nine episodes. The series begins with Chardonnay's funeral following her death from anorexia. It is also revealed that she killed Jason. Tanya married Frank Laslett as Jason had left her in debt. He also wanted her to admit that he did not rape her, and that Jason had made her lie in court. Kyle finds new romance. Tanya had an affair with the new captain Conrad Gates, and has to put up with his jealous wife, Amber Gates. Tanya and Amber soon became arch enemies, and have a vicious catfight. Amber Gates fakes her own kidnapping when Conrad starts seeing Tanya. Harley Lawson and Shannon Donnelly's lives are turned upside down when he becomes Earls Park's new signing. Conrad also has an affair with new signing Noah Alexander. The season ends with a shocking cliff-hanger. Tanya is pregnant with Frank's child. She killed Frank for his money by "shagging him to death" on a lethal combination of Viagra, alcohol and cocaine. When Amber Gates announces that she is pregnant with Conrad's child, Tanya tries to keep Conrad by claiming that she too is expecting his child.

The fourth was shown between 31 March and 26 May 2005 with nine episodes. Tanya and Amber both have their babies; Tanya had the babies swapped at birth to hide the possibility that hers could be Frank's, but this backfired when Amber's son (Tanya's, really) was smothered to death by Amber's dog. When the swap was discovered, Conrad and Amber claimed their rightful baby back and banished Tanya abroad. The footballers are involved in a rape scandal during a party in Spain. Shannon and Harley have marriage problems and eventually split up. Darius turns out to be the rapist of Katie in Spain, and has a breakdown when she kidnaps him for revenge. Jackie Pascoe marries club manager Roger Webb, who signs his son Seb to the club. Seb tries to cause trouble in their marriage, and is thrown out. Hazel leaves the club with her new girlfriend, a tennis player. New characters Bruno and Lucy Milligan have an adorable daughter, Angelica, but their marriage is eroding due to control-freak Bruno's emotional and sometimes physical abuse of Lucy. Lucy meets Dr. Giles Arrowsmith on the Internet and runs to him with Angelica in tow. He tries to kill Lucy, Angelica and himself in his car, believing he is re-creating the accident that killed his real fiancée the previous year. Bruno accidentally shoots Conrad, thinking he is Giles.

The fifth and final series was shown between 23 February and 13 April 2006 with eight episodes. After Lucy leaves Bruno at the altar of their Pride and Prejudice themed wedding, Amber takes the lead as the central character and wastes no time getting revenge on Bruno as she knows he killed Conrad. She moves in with him and inflicts her own brand of psychological torture on him by making him think he is losing his mind. Becoming more desperate, Amber tries to poison, then shoot, Bruno. In Amber's last and surely campest scene, she is shown wearing what looks like one of Cher's old costumes. In the struggle, she shoots Roger Webb, who loses his sight. Amber is then sectioned and sent to a mental institute for bleeding on the brain. Shannon, now divorced from Harley and feeling lonely, is delighted to hook up with the new Earls Park signing, Callum Watson. Shannon moves Callum in, but his interfering mother comes along and causes havoc. New characters include Tremaine Gidigbi and Liberty Baker, who marry in episode 5 in an Egyptian-themed, typically over-the-top wedding. Liberty, a top supermodel with a striking resemblance to Naomi Campbell, is exposed by the press for having a lesbian affair with her P.A. Urszula Rosen, then stars in a Japanese advert that makes her look like a cannibal. With Amber out of the way, Tanya returns and immediately aims to seduce Earls Park's latest star, Paulo Bardoso, and goes head-to-head with Eva de Wolffe (Joan Collins, best known as Dynasty character Alexis Colby). Tanya's joy at snatching Paulo from Eva's clutches is short-lived; he has a breakdown and is taken to a mental hospital, and Tanya finds herself penniless. New club chairman Garry Ryan kills Roger, and Jackie leaves to live with her son Kyle in Australia. Tanya discovers evidence that proved Garry's involvement. However, as series five ends, Tanya is trying to come to a "settlement" with Garry over the tape-recording that proves he caused Roger's death, when he offers her cocaine laced with poison.

In May 2006, it was announced by Shed Productions and ITV that no further series of Footballers' Wives would be commissioned. Its cancellation had been blamed on falling ratings, particularly during the fifth series when it was frequently beaten for audience share in its timeslot by BBC One's Hotel Babylon during the first half of the series. Despite a comeback to win the competition against BBC One's The Family Man (lead-in from Hotel Babylon), the figures did not reach expectations.

With the success of Footballers' Wives came the spin-off series, Footballers' Wives: Extra Time that began on ITV2 on 26 May 2005. It appeared after series four of the original and several characters, including Bruno and Lucy Milligan, Seb Webb, Harley and Shannon Lawson, Katie Jones and Amber Gates, appeared. The first series features the sister of Tanya Turner, Anika Beevor. Series two began on 23 February 2006 with Peter Ash as Darius Fry and Julie Legrand as Janette Dunkley from the original series as regular cast members. Nicholas Ball, who portrayed Garry Ryan in the series, crossed over to Footballers' Wives for series 5 as the new Chairman of Earl's Park Football Club.