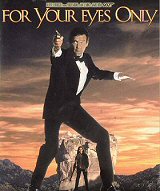 THE VILLAIN:    Aristotle Kristatos (Julian Glover) - Greek smuggler who formerly fought with the Greek Resistance alongside Columbo, now working with the Soviets, a double-agent pretending to be loyal to the British.

SUB-VILLAINS:    Bald-headed man with white cat (John Hollis) - unnamed incarnation of Blofeld who appears for one last go at 007.

Emile Leopold Locque (Michael Gothard) - enforcer in the Brussels Underworld, convicted murderer, a cold killer working for Kristatos who leaves small dove pin on the bodies of his victims in order to implicate Columbo.

General Anatol Gogol (Walter Gotell) - although Gogol is an ally on this mission, his efforts encourage the deadly methods of Kristatos.

Countess Lisl (Cassandra Harris) - not a real countess, an ally of Columbo, poses as an Austrian but actually English from Liverpool.

Bibi Dahl (Lynn-Holly Johnson) - champion skater, a protégée of Kristatos who is rejected by Bond when she climbs in his bed.