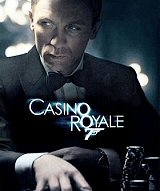 VILLAIN'S PLOT:    LLe Chiffre is a banker to the world's terrorists. He is participating in a poker game at Montenegro, where he must win back his money, in order to stay safe among the terrorist market.