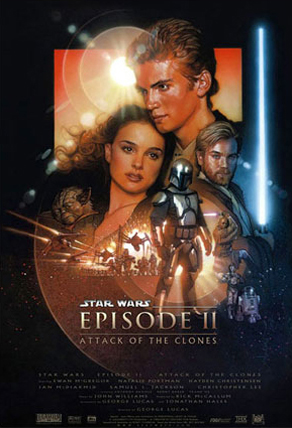 There is unrest in the Galactic Senate. Several thousand star systems have declared their intentions to leave the Republic.

This Seperatist movement, led by the mysterious Count Dooku, has made it difficult for the limited number of Jedi Knights to maintain peace and order in the galaxy.

Senator Amidala, the former Queen of Naboo, is returning to the Senate to vote on the critical issue of creating an ARMY OF THE REPUBLIC to assist the overwhelmed Jedi...

film directed by George Lucas and written by Lucas and Jonathan Hales. It is the

series's internal chronology. At 142 minutes, it is the longest film in the

The film is set 10 years after the events in Star Wars Episode I: The Phantom

Menace, when the galaxy is on the brink of civil war. Under the leadership of a

secede from the Galactic Republic. When an assassination attempt is made on

Skywalker is assigned to protect her, while his mentor Obi-Wan Kenobi is

assigned to investigate the assassination attempt. Soon, Anakin, Padmé, and

of a new threat to the galaxy, the Clone Wars.

Released on May 16, 2002, Attack of the Clones was one of the first motion

pictures to be shot completely on a high definition digital 24-frame system.

Like its predecessor, it garnered mixed reviews from critics[2] and was a

financial success; however, it also became the first Star Wars film to be

internationally out-grossed in its year of release.

The Galactic Republic is in turmoil. Following the invasion of Naboo ten years

a Separatist movement against the Republic. The Galactic Senate debates a plan

threat. Senator Padmé Amidala, the former queen of Naboo and now a politician,

returns to Coruscant to cast her vote. Upon her arrival, she narrowly escapes an

and his apprentice Anakin Skywalker (Hayden Christensen) to protect her. Obi-Wan

and Anakin subdue the assassin, Zam Wessell, during another assassination

attempt. However, before she can give them any information, the assassin is

killed by her employer using a poisonous dart. Obi-Wan learns that the dart was

manufactured on the remote ocean planet of Kamino, and is assigned to

investigate, while Anakin is assigned to escort Padmé back to her home planet of

Naboo. Anakin relishes the opportunity to spend time with her, and they fall in

love. In investigating Kamino, Obi-Wan discovers that it has been removed from

the navigation maps of the Jedi archives. Yoda reveals that such a thing could

only have been done by a Jedi, suggesting that a conspiracy is afoot.

Obi-Wan heads to Kamino, where he discovers that an army of clone troopers is

being secretly produced for the Republic, using a bounty hunter named Jango Fett

(Temuera Morrison) as their genetic template. Realizing that Jango is the

Geonosis, a rocky planet where a new droid army is being created. Meanwhile, on

Naboo, Anakin becomes troubled by premonitions of his mother Shmi in pain.

Despite Obi-Wan's orders to remain on Naboo, Anakin and Padmé go to Tatooine.

Raiders some weeks earlier. Anakin heads out alone to rescue Shmi, but the Jedi

snaps after witnessing the death of his mother at the hands of the Tuskens. He

kills the tribe in a rage and buries his mother's body at the Lars homestead.

Having learned that Count Dooku authorized the assassination attempt on Padmé

and that the Separatists are developing a new battle droid army, Obi-Wan relays

this information via hologram to Anakin, who transmits it to the Jedi Council.

However, Obi-Wan is captured by Dooku mid-transmission. Dooku unsuccessfully

attempts to make an ally of Obi-Wan, and reveals to him that the Republic is

being secretly controlled by Darth Sidious. While Anakin and Padmé head to

organize the clone army and send them into battle. Shortly after arriving on

Geonosis, Anakin and Padmé are captured and sentenced to be executed along with

Obi-Wan. Anakin and Padmé profess their love before being led into a large

a public execution. However, Mace Windu (Samuel L. Jackson) and a team of Jedi

appear and lead a strong defense against the beasts and the Separatists. Windu

kills Jango Fett in a brief battle, but then the Jedi find themselves

outnumbered by the Separatists' droid army. As Dooku demands their surrender,

Yoda arrives with the clone army and rescues the survivors of the battle. After

the arena is emptyed, Boba recovers the decapitated head of his father, and

swears revenge for him.

defeats them both, injuring Obi-Wan and severing Anakin's right arm, but then

Yoda arrives to challenge the Count. Unable to defeat Yoda, Dooku flees in his

ship to Coruscant, taking the blueprints for an ultimate weapon with him. He is

met in an isolated hangar by his Sith master, Darth Sidious, who states that

everything is going as planned now that the galaxy is at war. As the Jedi

gravely acknowledge the start of the Clone Wars, Palpatine oversees the

with an artificial arm– and Padmé secretly marry on Naboo, with C-3PO and R2-D2

Skywalker in Attack of the Clones. Ewan McGregor as Obi-Wan Kenobi: A Jedi

Knight and mentor to his Padawan learner, Anakin Skywalker, who investigates

balance to the Force." In the 10 years since The Phantom Menace, he has grown

powerful but arrogant, and believes that Obi-Wan is holding him back.

Natalie Portman as Senator Padmé Amidala: Former Queen of Naboo, who has

recently been elected the planet's Senator.

who amasses vast emergency powers upon the outbreak of the Clone Wars.

Christopher Lee as Count Dooku: A former Jedi Master who is now leader of the

Separatist movement as Darth Tyranus, and a suspect in Obi-Wan's

Temuera Morrison as Jango Fett: A bounty hunter who gave his DNA for use by

the cloning facilities on Kamino for the creation of the clone army. In

addition to his wage, he requested an unaltered clone for himself to take as

to sitting on the Jedi Council, Yoda is the instructor for the young Jedi

Anthony Daniels as C-3PO: A protocol droid for the Lars homestead.

Kenny Baker as R2-D2: An astro-droid, often seen on missions with Anakin and