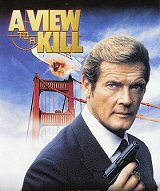 THE VILLAIN:    Max Zorin (Christopher Walken) - genius, product of Nazi death camp experiments to create super-intelligent children, fled east Germany in the 1960s,  now a leading French industrialist, head of Zorin Industries, a supposed staunch anti-Communist who is in actuality a KGB agent who breaks his ties to the Soviets to pursue his own dreams of domination.

Carl Mortner (Willoughby Gray) - elderly scientist who is actually Hans Glaub, a pioneer in the development of steroids who experimented on pregnant women in Nazi death camps in order to produce super-intelligent children, seized by Soviets after the war to help enhance athletes.

VILLAIN'S PLOT:    Zorin intends to corner the world market on silicon microchips by detonating a huge amount of explosives in a mine, which will trigger a massive double earthquake, flooding Silicon Valley.

Stacey Sutton (Tanya Roberts) - heir to Sutton Oil who lost the company to Zorin in a rigged proxy fight; trained as a geologist, working for the state of California, she is engaged in a legal fight with Zorin over control of the oil company.

THE BOND TEAM:    M (Robert Brown) - head of the British Secret Service, an authoritative father figure who sends Bond on his missions.