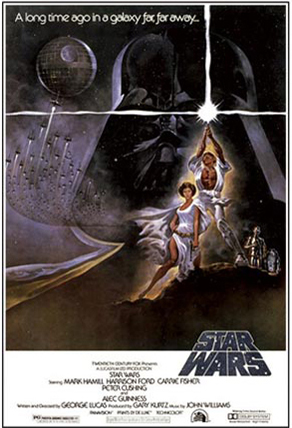 It is a period of civil war. Rebel spaceships, striking from a hidden base, have won their first victory against the evil Galactic Empire.

During the battle, Rebel spies managed to steal secret plans to the Empire's ultimate weapon, the DEATH STAR, an armored space station with enough power to destroy an entire planet.

Pursued by the Empire's sinister agents, Princess Leia races home aboard her starship, custodian of the stolen plans that can save her people and restore freedom to the galaxy....

Star Wars, now known as Star Wars Episode IV: A New Hope, is an American space opera film,[4] written and directed by George Lucas. Released in 1977, it is the first of six films released in the Star Wars saga: two subsequent films complete the original trilogy, while a prequel trilogy completes the six-film saga. It is the fourth film in terms of the series' internal chronology. Groundbreaking in its use of special effects, unconventional editing, and science fiction/fantasy storytelling, the original Star Wars is one of the most successful and influential films of all time.

Set "a long time ago in a galaxy far, far away", the film follows a group of freedom fighters known as the Rebel Alliance as they plot to destroy the powerful Death Star space station, a devastating weapon created by the evil Galactic Empire. This conflict disrupts the isolated life of farmboy Luke Skywalker when he inadvertently acquires the droids carrying the stolen plans to the Death Star. After the Empire begins a cruel and destructive search for the droids, Skywalker decides to accompany Jedi Master Obi-Wan Kenobi on a daring mission to rescue the owner of the droids, rebel leader Princess Leia, and save the galaxy.

Produced with a budget of $11 million and released on May 25, 1977, the film earned $460 million in the United States and $314 million overseas, surpassing Jaws as the nominal highest-grossing film and remained that way until being surpassed by E.T. the Extra Terrestrial in 1983. When adjusted for inflation, it is the second highest grossing film in the US and Canada and is the third highest-grossing in the world as of 2012. Among the many awards the film received, it gained ten Academy Award nominations, winning six; the nominations included Best Supporting Actor for Alec Guinness and Best Picture. The film is often ranked among the best films of all time. Lucas has re-released the film on several occasions, sometimes with significant changes; the most notable versions are the 1997 Special Edition, the 2004 DVD release, and the 2011 Blu-ray release, which have modified computer-generated effects, altered dialogue, and added scenes.

Rebel leader Princess Leia (Carrie Fisher) is in possession of the plans of the Galactic Empire's Death Star, but her ship is captured by Imperial forces under the command of the evil lord Darth Vader (David Prowse, voiced by James Earl Jones). Before she is captured, Leia hides the plans in the memory of an astromech droid called R2-D2 (Kenny Baker), along with a holographic recording. The small droid flees to the surface of the desert planet Tatooine with fellow protocol droid C-3PO (Anthony Daniels).

The droids are quickly captured by Jawa traders, who sell the pair to moisture farmers Owen and Beru Lars (Phil Brown and Shelagh Fraser) and their nephew, Luke Skywalker (Mark Hamill). While Luke is cleaning R2-D2, he accidentally triggers part of Leia's message, in which she requests help from Obi-Wan Kenobi. The only "Kenobi" Luke knows of is an old hermit named Ben Kenobi (Alec Guinness) who lives in the nearby hills. The next morning, upon finding R2-D2 after he escapes to seek Obi-Wan, Luke meets Ben Kenobi, revealing himself to be Obi-Wan. Obi-Wan tells Luke of his days as a Jedi Knight, one of a faction of former galactic peacekeepers who were wiped out by the Empire. Contrary to his uncle's statements, Luke learns that his father Anakin Skywalker fought alongside Obi-Wan as a Jedi Knight before he was betrayed and killed by Vader, Obi-Wan's former pupil who turned to the "dark side of the Force", and gives Luke his father's lightsaber.

Obi-Wan views Leia's complete message in which she begs Obi-Wan to take the Death Star plans to her home planet of Alderaan for her father to retrieve and analyze. He then asks Luke to accompany him and learn the ways of the Force. Luke initially refuses, but changes his mind after discovering that Imperial stormtroopers have destroyed his home and killed his aunt and uncle in search of C-3PO and R2-D2. Obi-Wan and Luke hire smuggler Han Solo (Harrison Ford) and his Wookiee first mate Chewbacca (Peter Mayhew) to transport them on their ship, the Millennium Falcon.

Upon the Falcon's arrival at Alderaan, they find that the planet has been destroyed under the orders of the Death Star's commanding officer Grand Moff Tarkin (Peter Cushing) to demonstrate the Death Star's power. The Falcon is caught by the nearby Death Star's tractor beam and brought into its hangar bay. While Obi-Wan goes off to disable the tractor beam, Luke discovers that Leia is imprisoned on board and, with the help of Han and Chewbacca, rescues her. After several harrowing escapes, they make their way back to the Falcon, but Obi-Wan sacrifices himself in a lightsaber duel with Vader. The Falcon escapes the Death Star but the Empire has placed a tracking device on the ship to follow them to the rebels' hidden base on Yavin IV.

The rebels analyze the Death Star plans, disclosing a vulnerable exhaust port leading to the station's main reactor. Luke joins the assault team, but Han collects his reward for the rescue and plans to leave despite Luke asking him to stay. The rebels suffer heavy losses after several failed attack runs, leaving Luke one of the few surviving pilots. Vader and a group of TIE fighters are about to destroy Luke's ship, but Han Solo returns at the last moment and destroys the TIE Fighters and the blast sends Vader spiraling away. Then Luke successfully destroys the Death Star seconds before it can fire on the rebel base. Luke and Han are subsequently awarded medals by Leia for their heroism.

Mark Hamill as Luke Skywalker: Luke is a young man who was raised by his aunt

and uncle on the remote, desert world Tatooine. He dreams of something greater

than his current position in life and eventually finds it. This is Hamill's

Harrison Ford as Han Solo: Han is a cynical smuggler whom Luke and Obi-Wan

meet at the Mos Eisley Cantina. They hire him to take them to Alderaan in his

ship, the Millennium Falcon, which is co-piloted by Chewbacca.

Carrie Fisher as Princess Leia Organa: Leia is a member of the Imperial

Senate and a leader of the Rebel Alliance. She plans to use the stolen Death

Alec Guinness as Obi-Wan "Ben" Kenobi: Obi-Wan is an aging man who served as

a Jedi Knight and then Jedi Master during the Clone Wars. Early in the film,

Kenobi introduces Luke to the Force.

Peter Cushing as Grand Moff Tarkin: Tarkin is the commander of the Death Star

and a Regional Governor of the Galaxy. He leads the search for the Rebel Base,

hoping to destroy it. He is the main antagonist of the film.

David Prowse as Darth Vader: Vader is a Dark Lord of the Sith and a prominent

figure of the Galactic Empire who hopes to destroy the Rebel Alliance. He is

Anthony Daniels as C-3PO: 3PO is a protocol and interpreter droid who also

falls into Luke's hands. He is rarely without his counterpart droid, R2-D2.

Kenny Baker as R2-D2: R2 is an astromech droid who is carrying the Death Star

plans and a secret message for Obi-Wan from Princess Leia.

Wookiee and first mate of the Millennium Falcon.

was casting his own film Carrie. As a result, Carrie Fisher and Sissy Spacek

auditioned for both films in each other's respective roles. Lucas favored

casting young actors without long-time experience. While reading for Luke

Skywalker (then known as "Luke Starkiller"), Hamill found the dialogue to be

extremely odd because of its universe-embedded concepts. He chose to simply read

it sincerely and was selected instead of William Katt, who was subsequently cast

Anthony Daniels, the chosen actor to portray C-3PO was convinced to take the

role after seeing a design drawing of the character's face.

Lucas initially rejected the idea of using Harrison Ford, as he had previously

worked with him on American Graffiti, and instead asked Ford to assist in the

history behind the scenes that they were reading. Lucas was eventually won over

by Ford's portrayal and cast him instead of Kurt Russell, Nick Nolte,[6]

Lando Calrissian in the sequels), and Perry King, who wound up playing Solo in

Many young actresses in Hollywood auditioned for the role of Princess Leia,

including Cindy Williams.[5] Carrie Fisher was cast under the condition that she

lose 10 pounds for the role. Aware that the studio disagreed with his refusal to

in London, where Mayhew was cast as Chewbacca after he stood up to greet

Lucas.[9] Lucas immediately turned to Gary Kurtz, and requested that Mayhew be

cast. Daniels auditioned for and was cast as C-3PO; he has said that he wanted